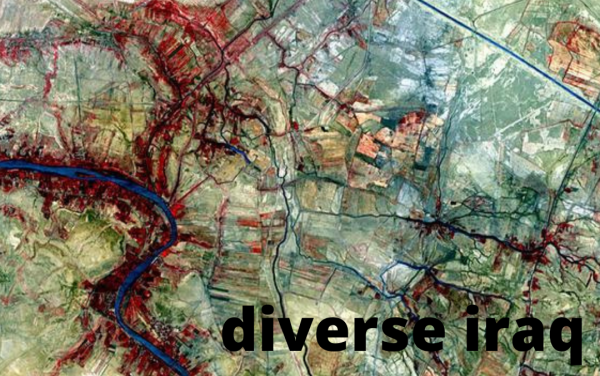 In this new series of Iraq’s diverse literary scene, we aim to introduce aspects of the Iraqi literary scene that are little-discussed in English. In particular, we aim to shed light on literary works that show the diversity of Iraq’s different communities, be they political, social, religious, cultural, economic, or communities of choice, as well as diasporas and displacements that were and are still ongoing in Iraq.

This series — which will include reviews, interviews, and translated literary works — will run on Thursdays here at ArabLit.

In this first week, we focus on work by novelist Abdullah al-Sakhi, who was born in 1951, left Iraq in 1979, and published his first novel looking at Iraq’s internal migrants, Behind the Dam, in 2008. In the discussion below, al-Sakhi talks about the communities and people who informed his novels. We also have an except from his Pathways of Loss.

Hend Saeed: Your trilogy—Behind the Dam (2008), The Pathways of Loss (2013), and The Iraqi Refugee (2017)—takes place in Baghdad between the 1950s and the 1980s, and the subsequent two books follow the lives of the same characters who appear in the first book, Behind the Dam. Can you tell us more about them, and why you choose to write about these particular people?

Abdullah al-Sakhi: The events in Behind the Dam novel start in the 1920s, when the farmers who participated in the “Iraqi revolution” of the 1920s were being harassed by the government and enslaved by the feudal lords who took most of their harvest and left them with debt and hardly any food; they decided to migrate to Baghdad in hopes of a better life and better work opportunities.

Most of them came from the south and southwest of Iraq, moving to Baghdad, arriving as groups or individuals, and they created their own settlements on the outskirts of the city. The most famous settlement was “The Capital,” which was located behind the dam that was build by the Ottoman Wali Nathem Pasha in 1910 (and today is located behind Mohammed Al Qassim highway), to protect Baghdad from the yearly flooding of the Tigris River, and that’s how the title of the book came about.

The houses were built from reeds, wooden poles, and mud, and they didn’t fulfill the basic requirements of decent living, and therefore were center of endemic diseases. And that also goes for the second camp in al-Shakeria (which is in today’s Green Zone).

Experiencing the life of an immigrant who moved around many times until I settled in exile led me to think about this continuous migration, and I decided to write about the people behind the dam before they were transferred to al-Thawra City (now known as al-Sadr City), during Abdul Karim Qassim’s government, in the early sixties.

HS: The trilogy started with Makia al-Hassan and Salman al-Younis’s migration to Baghdad in search of a better life, and they await the promised city that comes too late. It ends with Ali (the son) as a refugee, dying slowly alone in a foreign country. Do you think that Iraqis can still hope for better life inside the country? Are you thinking of writing about this new era of Iraqi life?

AS: No real change has happened in the Iraqi community since the 1958 revolution, despite the oil resources. And if there was any serious attempt during the short-lived 1958 revolution, it was aborted by the coup on February 8, 1963. The country was almost refreshed in the early seventies, but then deteriorated economically and socially, due the political adventures and wars that led to spending billions of dollars on arms and bribes, until the American invasion and the fall of Saddam in 2003. Since then, until now, Iraq has witnessed a fall in education and health, and an increase in unemployment, youth suicide, and the biggest robbery of its history, to the extent that the government today is unable to pay employees’ salaries.

I have a project, but it’s not about the future of Iraq. The future is unknown and is surrounded by danger. The project starts from the current time and goes into the past.

HS: There are many women in your novels, such as Makia al-Hassan, who I think represents the strength of Iraqi women through her patience, and sometimes through her inability to leave. Are these characters modeled on real-life women?

AA: Yes, women play a big role in the three books. Women are the core of the community; they run the house, deal with family issues, and the Iraqi women endured all the political changes and took on the role of the provider when their husbands were imprisoned.

The women in my books are based on real-life women who I lived among during my childhood and youth, women in the neighborhood or relatives, although I had to change the characters to fit the narrative flow and symbolism of the novel.

HS: What was the reason for using the full name of the characters throughout the three novels, such as Makia al-Hassan, Salman al-Younis?

AA: I believe that Arabic words have a deep music that I tried to show in my writing to achieve strong pure sentences, even in the simple sentences. This also applies to names, and in order to get the music, I felt I needed to have a rhythmic name in the narrative.

HS: Can you tell us about your experience in translation and transferring language and culture into Arabic? What were the difficulties, and did you enjoy the work?

AS: Each experience has been its own adventure, and well-known translators who are my friends encouraged me.  I translated short-story collections by Hermann Hesse and a novel by Ngũgĩ wa Thiong’o, but the deeper I go into the Arabic and English languages, which is the pair I work with, the more I find I still need to know, and the more my fear increases, and that’s why I haven’t done any other translations, although I might in the future.

HS: Recently, there has been some discussion about whether or not the translator can delete or change in some parts of a book if it isn’t in accordance with the culture of the other language. Have you faced such issues?

AS: In my opinion, we have to respect the original text, and we shouldn’t delete or change it even if it goes against our beliefs or our cultural values. We are transferring the values, culture, and lives of those who are different from us in almost everything, and we can’t simply just delete and change their values.

With regard to my simple experiences, yes, I have had some difficulties. My difficulties were about using certain expressions. I would say translation depends on knowledge, trust, and hard work.

Hend Saeed is an Arabic literature & cultural consultant, literary translator, reader, writer, and life coach, and also an editor-at-large for ArabLit. She also contributes to other publications and has published a collection of short stories.

This post was first published in ArabLit: Abdullah al-Sakhi on Writing His Multigenerational Iraqi Trilogy